Sometimes you want to get away from everything and unplug from the world.

Fortunately, spending time off-grid doesn’t have to mean living a spartan lifestyle. If you have a portable power station, you can operate many devices off-grid, including major household appliances. The type of appliances your PPS can run depends on its output and storage capacity, and the wattage of devices you want to operate simultaneously.

How Do I Know If My Portable Power Station Can Run an Appliance?

To find out what devices you can use, you need to know both the maximum power output and capacity of your portable power station. In addition, you need to know the power requirements for whatever appliances you want to use.

Your portable power station’s capacity is measured in watt-hours (Wh) or kilowatt-hours (kWh). This number indicates the maximum number of watts the PPS can output. When you divide the PPS capacity by the wattage requirement of an appliance or device, you can learn how long you can run that appliance or device and if the PPS provides sufficient electricity for it to operate.

Your PPS capacity should have extra wattage to accommodate the appliance’s startup current or surge power. The running capacity of a machine like an air conditioner is almost always lower than the surge capacity needed to turn it on.

EcoFlow’s portable power stations offer an X-Boost feature that helps provide additional output to get appliances up and running.

The total time you can run a device or appliance also depends on how many items you operate simultaneously without recharging. If you are spending time off-grid, you may want to rotate devices rather than powering everything at once.

Understanding the math will help you prepare for purchasing the amount of portable power you need to meet your off-grid requirement.

Here are some examples of what portable power stations can—and can’t—do:

Can a Portable Power Station Power a TV?

Most portable power stations can run a television with little difficulty. A TV uses a relatively low hourly wattage. Most modern TVs use an average of 100 watts per hour, ranging from 50 to 200 watts per hour.

A 100-watt demand isn’t too high. Even if you have one of the smaller capacity RIVER 2 Portable Power Stations, which range from 256Wh to 768Wh, you could run your TV for 2-7 hours. A more powerful PPS—such as one of the DELTA series—would carry you much further.

The runtime will change if you need to run other devices simultaneously with the TV. For example, if you want to stream online content or run a Blu-ray player at the same time as your television, you need to consider the wattage requirements of any connected devices. Any time you charge multiple devices or appliances, it will affect the total power you use and how long your generator will deliver on your needs between charges.

The power consumption of even a big-screen TV is relatively small. You should be able to enjoy television for as much of the day as you want if you connect it to a high-capacity portable power station. There is little reason you should feel compelled to abandon television in your off-grid time (unless you want to!) 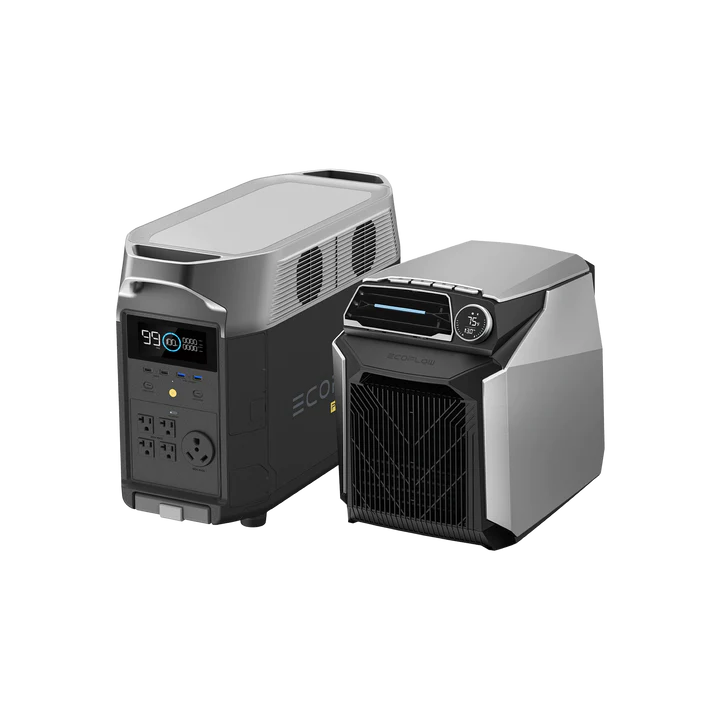 Can a Portable Power Station Power Your AC Unit?

Some efficient portable AC units like the EcoFlow Wave blast 40000BTUs but only require 1200W.

If you want to run a motorhome air conditioning system, you may need as much as 3,600 watts to get the unit running and between 500-1,800 watts per hour to run it. For smaller portable power stations, this is likely too much. A station designed to power small appliances or personal electronic devices will not be able to keep up with your air conditioning needs, even if it does deliver enough power to get your AC unit started in the first place.

A more powerful unit like the DELTA Pro, on the other hand, with an expandable power capacity available up to 25 kWh, can power the average air conditioner for ten hours out of the box. The DELTA Pro pairs seamlessly with the Wave to keep the AC running for 12 hours.

While air conditioning demands much from your power station, some units are up to the task. You should limit air conditioning usage to the hottest parts of the day and be prepared to recharge during the off-peak hours. Still, you can cool off when the heat reaches its summer day peaks. Can a Portable Power Station Power a Refrigerator?

The more powerful portable power stations on the market can power a refrigerator if needed. A typical refrigerator uses 1 to 2 kWh per day. The wattage demand depends on the size, model, and how cold you keep it. Most power usage comes at startup and when your compressor is running. The more the compressor works, the more energy your refrigerator consumes.

Generally, you should expect a refrigerator to require up to six times the rated current for surge power at startup. The rating information on the appliance will show the refrigerator startup requirement as the Locked Rotor Amp (LRA) value, measured in amps. You can multiply amps x volts to get the required wattage.

The efficiency ratings on your refrigerator tell part of the story for you. Newer, higher-efficiency refrigerators keep food cooler for longer by limiting the time the compressor runs and the energy needed to run it. Look to the rating numbers to determine your daily energy consumption for that refrigerator, and make sure your power station has enough capacity to handle it.

Once it’s up and running, even a small power station can keep your refrigerator going for most of the day. A larger PPS, such as the DELTA Max, can keep it going for two days or more before you have to recharge. Further, a compact camping or motorhome refrigerator can run for much longer on a portable station powered by portable solar panels, allowing you to keep your items cold during an extended off-grid trip. 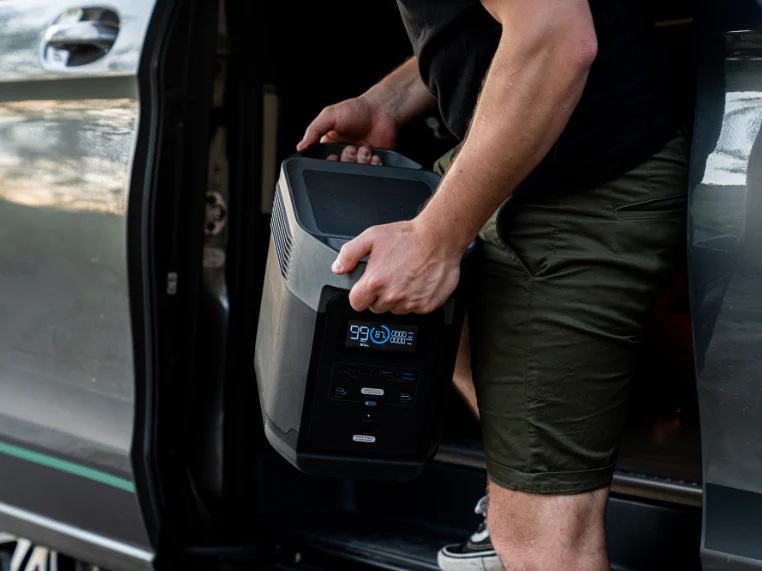 A portable power station lets you keep essential appliances running in a power outage or off-grid while enjoying your television, air conditioning, or fridge. The EcoFlow portable power stations provide a range of available power ratings, with LCDs that show how long your PPS will last before the next recharge. A smartphone app even tells you everything you need to know about your portable power supply.